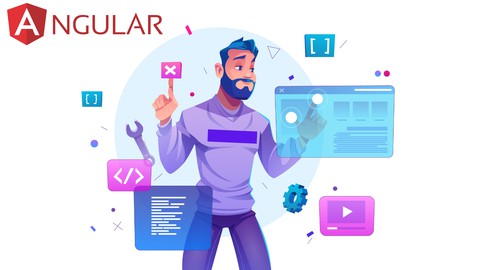 
The Angular framework allows a developer to build Angular web apps faster and make them highly efficient due to the technical advantages offered by the framework. Below you can see the list of factors assisting programmers in faster development with Angular.
Detailed Documentation. Angular developers took care of making Angular approachable and easy to learn. They provided carefully written documentation and endowed it with great code examples for clarity, so that a developer could easily find a way out of any issue while building an application.
Angular CLI. The Angular command-line interface makes the developer’s job easier because it offers a set of helpful tools for coding. Besides its powerful built-in features that we are about to uncover further, Angular CLI can be extended with third-party libraries to solve unusual and complicated software issues.
Two-Way Data Binding. Two-way data binding is the time-saving feature that automates some processes of code generation. In AngularJS, within a Model-View-Controller architecture, if a developer changes something in model, the view matching to that model changes as well and vice versa. In brief, when app data is modified, the UI changes as well.
Differential Loading. The newest versions of Angular allow creating two kinds of bundles – the tools that contain code and the resources required for efficient programming. To make the app browser-compatible, one bundle is used for modern browsers that support ES2015+ and another one for older browsers that support ES5 JS version. With differential loading, browsers can load less code and polyfills, which makes the app more productive.
Google Support. Google created Angular to use it internally for its official websites and solve problems in Google's internal systems. Angular updates every 6 months offering small changes for each new version and gradual, yet confident and continuous evolvement of the framework.
Large Developer Community. Angular is widely popular among developers throughout the world. Since the very first set of AngularJS, there has always been a powerful community around the framework. Angular specialists constantly contribute to the framework, share programming experience, discuss specific issues, and find ways to solve problems together.
Who this course is for: Beginners in Angular