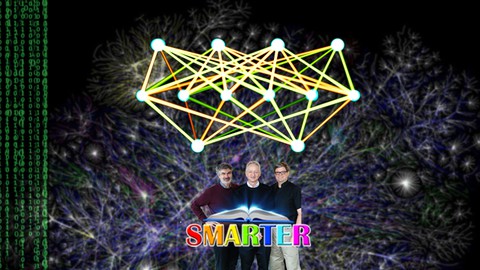 
Artificial Neural Networks [ANNs] Practical Tests and Answer
Deep Neural Networks [DNNs] and Artificial Neural Networks [ANNs] Practical Questions and Answers
Artificial neural networks (ANNs), usually simply called neural networks (NNs), are computing systems inspired by the biological neural networks that constitute animal brains.
An ANN is based on a collection of connected units or nodes called artificial neurons, which loosely model the neurons in a biological brain. Each connection, like the synapses in a biological brain, can transmit a signal to other neurons. An artificial neuron receives a signal then processes it and can signal neurons connected to it. The "signal" at a connection is a real number, and the output of each neuron is computed by some non-linear function of the sum of its inputs. The connections are called edges. Neurons and edges typically have a weight that adjusts as learning proceeds. The weight increases or decreases the strength of the signal at a connection. Neurons may have a threshold such that a signal is sent only if the aggregate signal crosses that threshold. Typically, neurons are aggregated into layers. Different layers may perform different transformations on their inputs. Signals travel from the first layer (the input layer), to the last layer (the output layer), possibly after traversing the layers multiple times.
Deep learning (also known as deep structured learning) is part of a broader family of machine learning methods based on artificial neural networks with representation learning. Learning can be supervised, semi-supervised or unsupervised.
Deep-learning architectures such as deep neural networks, deep belief networks, deep reinforcement learning, recurrent neural networks and convolutional neural networks have been applied to fields including computer vision, speech recognition, natural language processing, machine translation, bioinformatics, drug design, medical image analysis, climate science, material inspection and board game programs, where they have produced results comparable to and in some cases surpassing human expert performance.
Artificial neural networks (ANNs) were inspired by information processing and distributed communication nodes in biological systems. ANNs have various differences from biological brains. Specifically, artificial neural networks tend to be static and symbolic, while the biological brain of most living organisms is dynamic (plastic) and analogue.
The adjective "deep" in deep learning refers to the use of multiple layers in the network. Early work showed that a linear perceptron cannot be a universal classifier, but that a network with a nonpolynomial activation function with one hidden layer of unbounded width can. Deep learning is a modern variation which is concerned with an unbounded number of layers of bounded size, which permits practical application and optimized implementation, while retaining theoretical universality under mild conditions. In deep learning the layers are also permitted to be heterogeneous and to deviate widely from biologically informed connectionist models, for the sake of efficiency, trainability and understandability, whence the "structured" part.
Artificial intelligence (AI) is intelligence demonstrated by machines, as opposed to natural intelligence displayed by animals including humans. Leading AI textbooks define the field as the study of "intelligent agents": any system that perceives its environment and takes actions that maximize its chance of achieving its goals.
Some popular accounts use the term "artificial intelligence" to describe machines that mimic "cognitive" functions that humans associate with the human mind, such as "learning" and "problem solving", however, this definition is rejected by major AI researchers.
AI applications include advanced web search engines (e.g., Google), recommendation systems (used by YouTube, Amazon and Netflix), understanding human speech (such as Siri and Alexa), self-driving cars (e.g., Tesla), automated decision-making and competing at the highest level in strategic game systems (such as chess and Go). As machines become increasingly capable, tasks considered to require "intelligence" are often removed from the definition of AI, a phenomenon known as the AI effect. For instance, optical character recognition is frequently excluded from things considered to be AI, having become a routine technology.
Artificial intelligence was founded as an academic discipline in 1956, and in the years since has experienced several waves of optimism, followed by disappointment and the loss of funding (known as an "AI winter"), followed by new approaches, success and renewed funding. AI research has tried and discarded many different approaches since its founding, including simulating the brain, modeling human problem solving, formal logic, large databases of knowledge and imitating animal behavior. In the first decades of the 21st century, highly mathematical statistical machine learning has dominated the field, and this technique has proved highly successful, helping to solve many challenging problems throughout industry and academia.